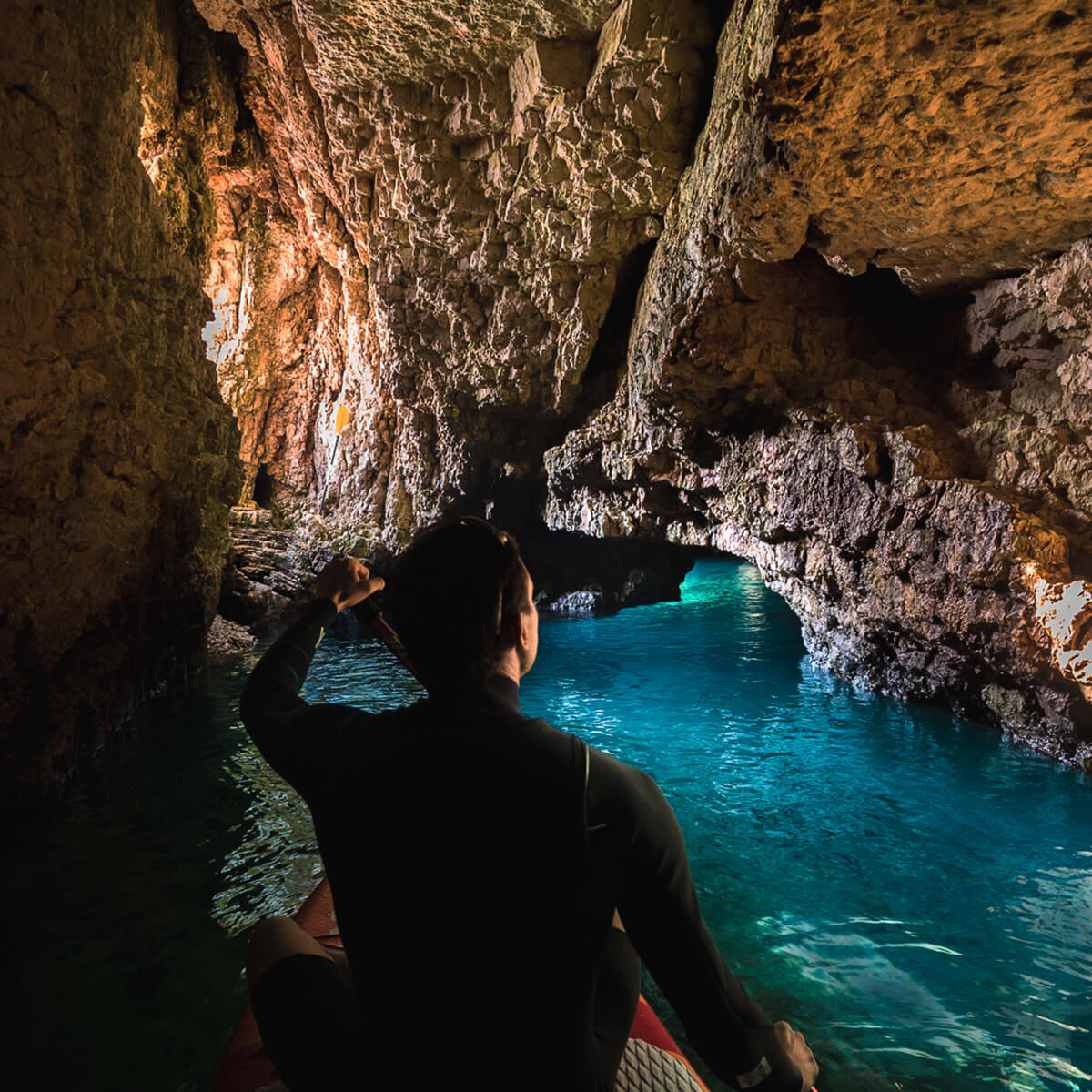 Istria, Terra Magica, or magical land carries this epithet for a reason. This Croatian region is known for many things, picturesque landscapes, rich history and invaluable cultural heritage, legends, sea and beaches, gastronomic delicacies, and hospitable hosts. But Istria also has its second, mystical and hidden world, in which nature for millions of years, in silence and away from people and light, created the most incredible possible forms of “cities” under the earth and sea.

Most of Istria is characterized by karst relief, so as much as 70% of the peninsula is on a limestone base, which changes its shape of time and water changes the shape and creates real underground empires. Below is a list of the most beautiful Istrian caves and pits, and some of them you can visit with Jistra Adventures and experience Istria from a completely different perspective.

Located in the vicinity of the city of Porec, and only 5 km from the coast, this cave is by far the most famous and most visited on the Istrian peninsula, a perfect one to start your cave adventures in Istria. Its name comes from the very terrain on which it is located, baredina, which could be translated from the local dialect as neglected land. Discovered, like many others, quite by accident, it has been open to the public since 1995. This amazing geomorphological monument, which stretches for 300 meters in length, will take you deep into its interior, all the way to an underground lake at a depth of 60 meters. In addition to magical sculptures that nature has carved for centuries, in the Baredine cave you can also see an endemic animal that lives only in these karst areas – the human fish. At a pleasant 14 degrees, expert guides will take you through the pit and in 40 minutes tell you all about how nature created this fantastic underground world.

The cave complex is enriched with agricultural exhibitions and exhibitions of olive oil, an excellent indigenous gastronomic offer, which will conjure up the life of an Istrian peasant with live music.

This true Istrian beauty, located in the heart of Istria not far from the small town of Žminj, has its own special story. It is located in the village of Feštini, and it got the name kingdom because of the children who would gather and leave the house to play. When their parents asked them where they were, they would say – in the kingdom! So, it got the name Feštini Kingdom. It was discovered back in 1940, during agricultural work and planting vines, and after World War II it was buried. The cave was re-excavated in the 1980s when it was quite devastated and even looted because unscrupulous visitors would tear off pieces of the sculptures for souvenirs.

Today, this is truly a real underground kingdom renewed for visitors, with hundreds of meters of groomed trails and amazing natural shapes such as bat wings, the Tower of Babel, the wizard’s hat, and many other cave decorations.

The cave can be reached from Žminj very easily, by well-marked roads in the direction of Feštini village. Information about tickets and tours can be found here.

Although this natural pearl is mentioned as early as 1771 in the travelogue of Albert Fortico, the locals managed to keep it as their secret for a long time. Today, it is a private property of the Sterle family near Brtonigla, which received a concession, and in addition to visiting the cave with expert guidance, they enriched the offer with fantastic typical Istrian agritourism.

This cave, one of the most famous caves in Croatia, which still actively creates amazing new decorations, got its name from a very specific color, the color of marble. It consists of one large room, also the largest and most beautiful Istrian underground room, 93 meters long and 51 meters wide.

In addition to the fantastic stone decorations, inside the cave, there is a small hill, which can confuse you. But it is a valuable artifact, one of the prehistoric tombs. Research inside the cave has confirmed that people were buried in this place in ancient times. The action of the human hand is visible in a less beautiful way too, that of destroying centuries-old ornaments. One of the most impressive stalagmites was almost completely destroyed for a very bizarre reason – people believed that the water inside it had healing properties.

When the largest Istrian underground river found its way to the Raša Valley, it showed the power of nature in the most picturesque way possible, creating the magnificent Pazin Cave, today a favorite destination for lovers of summer adrenaline activities.

As Istria is a land of legends, there is also one about the origin of the cave.

“In ancient times, when giants lived with people in Istria, huge lakes and swamps stretched in the north of Istria. There were no streams or springs in the south, so people asked the main giant named Dragonja to help them soak the land. The giant harnesses huge oxen to the plow and plows from the lake to the sea. When he brought the water to the sea with the first furrow, a river was created which the giant named after himself, Dragonja. The next day he plowed another furrow, thus creating a new river which he named after his wife, Mirna. When the third furrow came under the walls of the Pazin castle, the wife of the Pazin captain began to tease him from the window. She mocks him for plowing shallowly and for his furrow. Dragonja is very offended and chases the oxen back. The water boiled through the unfinished furrow and began to flood the Pazin valley. The people of Pazin began to cry and beg Dragonja to save them from danger. Dragonja felt sorry for them and kicked the ground, just below the cliff on which the castle rose. With a terrible roar, the earth began to crumble, a huge pit opened from the blow and swallowed all that water. Thus, instead of the third river, the winding river Pazinčica was created, whose water is still lost in the steep Pazin Cave. “

More information about this geomorphological monument and the ecological and adrenaline activities it offers can be found here. 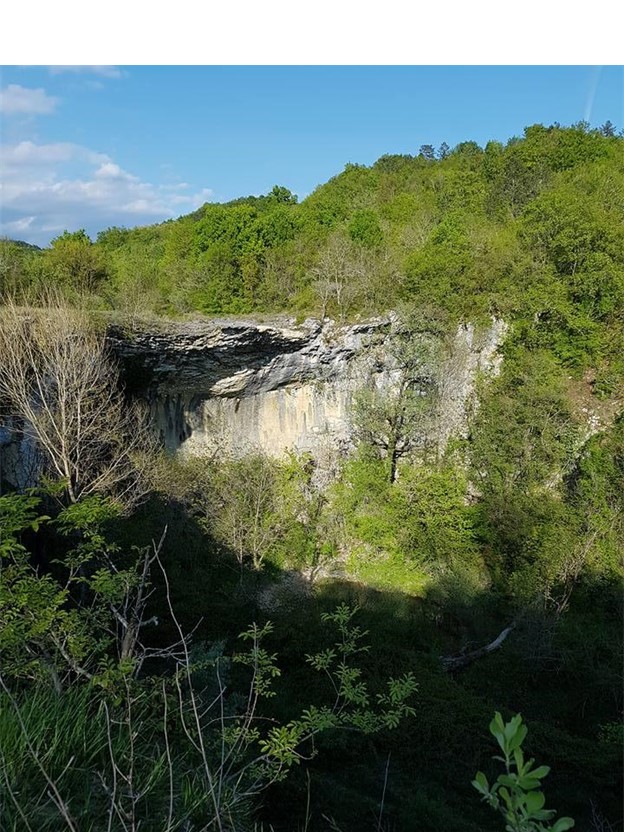 In the middle of the western Istrian coast stretches Lim bay, a natural reserve and the natural border of northern and southern Istria. Along the 11-kilometer-long bay, surrounded by steep hills, many natural treasures are hidden, including two very interesting caves, Romuald’s and Pirate’s cave.

Romuald’s cave was named after Saint Romuald, a hermit who lived here. For centuries, believers gathered at this place and after the Mass of the Feast on June 19, in a procession went all the way to the entrance to the cave. The remains of a cave bear, a cave lion, a leopard, a wolf, a fox, a brown bear, a cave hyena, a snow rabbit, a beaver, a wild horse, a deer, a deer, and as many as 41 species of birds were found inside the cave. In addition to the remains of extinct Ice Age animals, evidence has been found in the sediments of the cave including the proof that prehistoric man also lived in it. Recently, Paleolithic cave paintings, more than 30,000 years old, were discovered in the cave, the very first of its kind in Croatia! The paintings depict preserved prehistoric works of art that faithfully depict figures of bosons, chamois and human figures, similar to those in the much more famous Altamira.

After these valuable discoveries, further archaeological research is being carried out in the cave, so it is currently closed to the public, but an easy and pleasant walk can still reach the entrance to the cave from the beginning of the Lim Bay.

On the northern side of Lim Bay, there is another magnificent cave, somewhat more difficult to access, but worth the effort. It is called a pirate cave based on a legend about a cruel and ruthless sailor, Henry Morgan, whose turbulent and dangerous life led him even to the shores of Lim Bay where, as believed, he buried his treasure that has not been found to this day. The legend became even more interesting when the locals of the village of Mrgani discovered that in the past the village was named Morgani and the whole lineage of people with Morgani family name lived in it.

The cave is easiest to reach by boat from the sea, but for those who want to try to find hidden treasure too, there is a forest trail from the village Kloštar, which will lead you to this wonderful cave, today turned into a charming bar with a beautiful view of almost the entire bay. 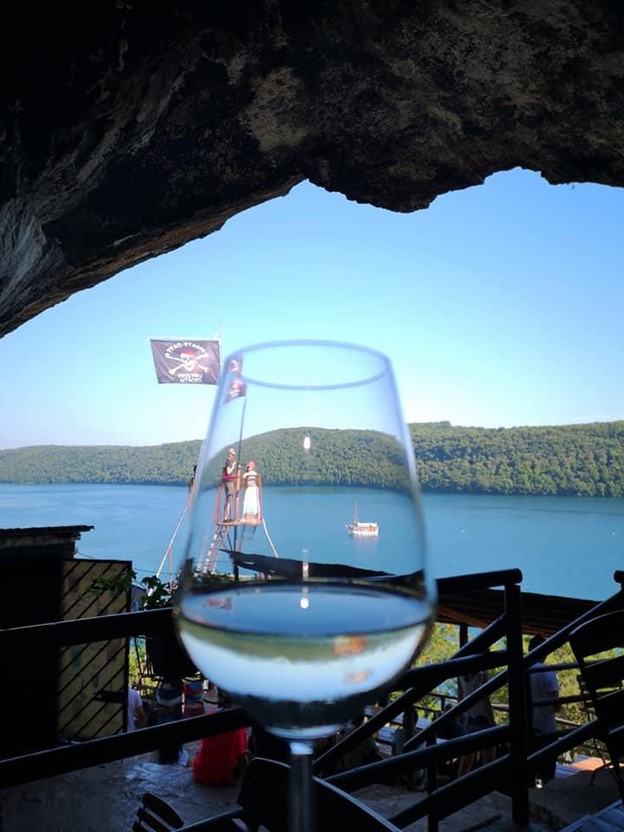 Let’s not forget the sea caves! Just like the hinterland, the Istrian coast is rich in the incredible underground world too, both known and lesser-known. Several such amazing caves in Pula are located on the Seagull Rocks in the immediate vicinity of the town.

This natural complex of rocks surrounding the bay is located just ten minute’s drive from the center of Pula, near the former barracks, with a short forest road leading directly to the rocks.

To some, it is the Seagull’s Rocks, to others the Pigeons Rocks. They were named, of course, after the numerous colonies of the seagulls and pigeons that inhabit them.

At the very top of the rocks, there is a quiet pine forest, ideal for all who like to enjoy the shade on the beach, and a few meters from the forest start the rocks, from which you can easily descend to the sea. For those most adventurous, these beautiful white rocks are a natural jump into the crystal-clear sea and the front door to several beautiful caves. You can explore diving or kayaking and start your sea caves adventure in Pula.

One of the most beautiful sea caves in Istria is this one, at the very top of Cape Kamenjak. The best way to explore it is to join one of the fantastic JIstra Adventures tours and make the most of your summer in Pula. Not only will you be able to enjoy swimming on the beautiful beach, or dare to jump off steep cliffs, but you will also have the opportunity to dive into the blue of the cave and get to know its world, a world just perfect for fantastic underwater photos. With a little luck, you may also meet a Mediterranean monk seal who, according to locals, has returned to its natural habitat.

Along with Velika, there is also Mala Kolombarica, near which there is a cult Safari bar where you can refresh yourself, but also enjoy the view from the viewpoint, stretching to the sea, Fenoliga Island and the lighthouse Porer. 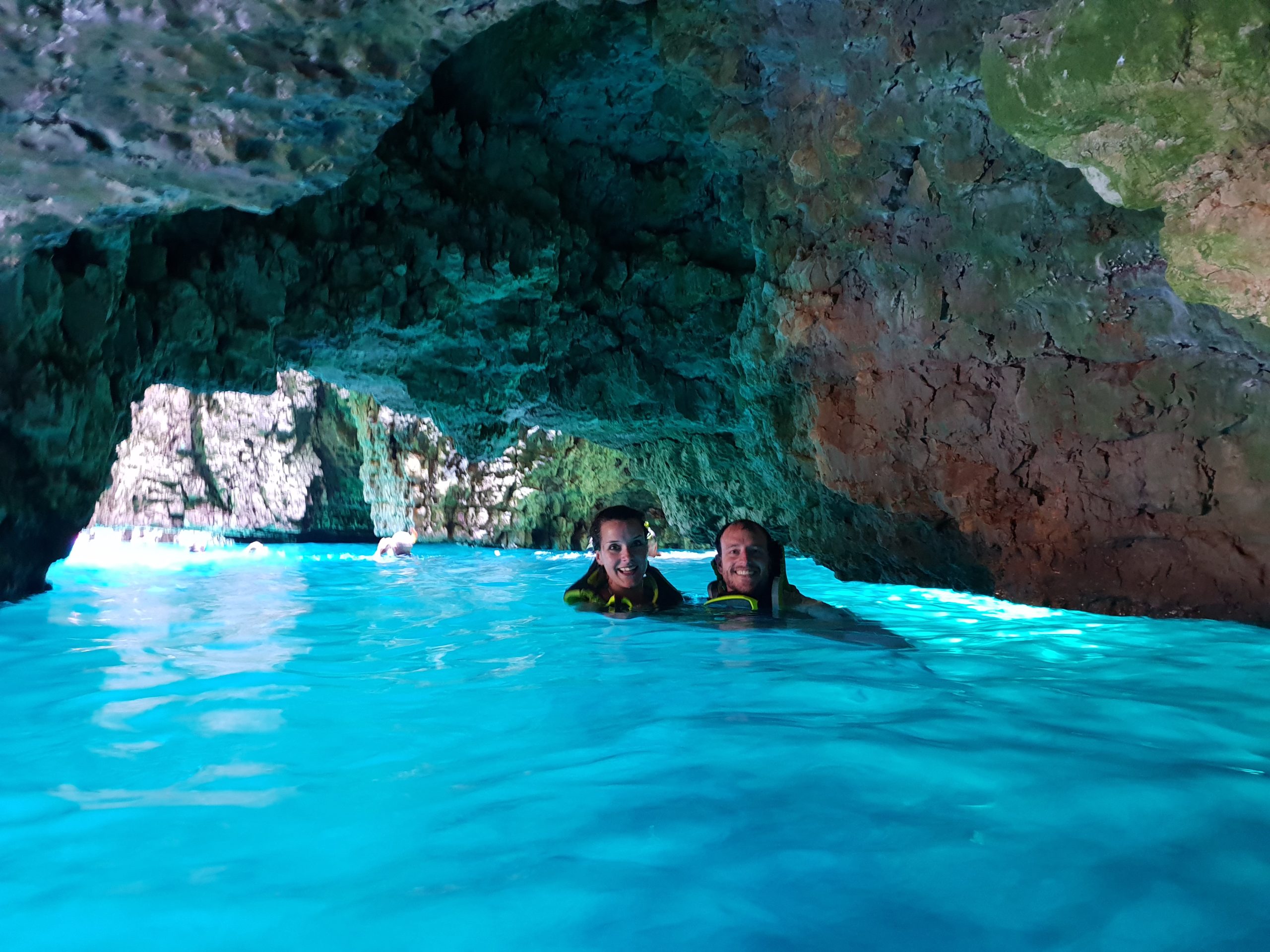 Very few people know that another beautiful sea cave exists on the Fratarski Island, located in the bay of the same name in the south of Pula, which is traditionally a favorite destination for weekend getaways for many Pula residents. Originally called Veruda, the island owes its present name to the Franciscan observers and priests who settled here until the beginning of Napoleon’s rule in Istria. The monastery was then closed, and the island has since been named Fratarski.

The island is especially known as a paradise for divers, so many diving courses are organized here. On the southern side of the island, between millions of rocks and cracks, at a depth of 16 meters, there is a small cave, a natural habitat of large sea wigs. What makes this cave different from the others, is the exceptional richness of marine flora and fauna, with numerous species of fish, crabs, algae, stars, and even charming seahorses.

Whichever adventure you decide to go on, the one on land or at sea, we will be happy to help you create your most beautiful underground memories of Istria. You can contact us here, and we will make sure you experience Istria in a completely different way, by literally diving into its mystical depths.